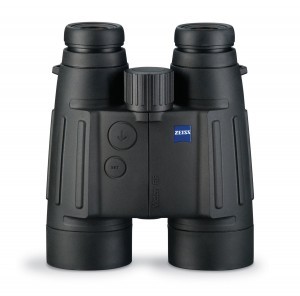 is part of a larger lineup of Zeiss rangefinder binoculars. It offers incredible accuracy in determining distances as well as superb visual clarity.

It does have its setbacks, but it works as a good alternative for those that need the basics but want to spend less compared to the Leica Geovid HD-B model.

The Zeiss Victory RF is one of the most accurate rangefinder binocular units on the market. It consistently displays accurate readings at various distances between 600 and 1,200 yards, and it costs less than the competing Leica Geovid HD-B.

The Zeiss Victory RF is one of the top performers in visual quality compared to many popular models, and this is partly due to its use of fluoride glass. The Victory RF can produce clear images even beyond 1,400 yards. It features a larger objective lens than many other common models of rangefinder binoculars.

The Zeiss Victory RF has a 45-mm lens that allows more light to get in in low light conditions. The model also has a wider field of view than other models.

The manufacturer only claims to provide 1,300 yards with the Victory RF, but the unit can accurately read distances for targets much farther. The Zeiss binocular is extremely accurate even at longer distances around 1,600 yards.

The readings for this model are so accurate that they fall within less than one percent of the exact distance the majority of the time. This kind of consistency is usually only found on the ultra-pricey units.

The Zeiss Victory RF uses the brand’s Ballistic Information System. It provides six saved trajectory paths, and the user must select the best one for their caliber, bullet weight and bullet type. The drawback to this system is the fact that it is highly unlikely only six preset curves can provide accurate shot information for every type of cartridge. Even Zeiss acknowledges that points are only given for distances up to 500 meters.

The best rangefinder binoculars feel comfortable in the hands and make use of the units easy and simple. The Victory RF features large light buttons that help center the laser on the target without having to press with so much force that the laser is knocked of its intended path.

The button is easy to reach, and it also produces a clicking sound to confirm when it has been pressed. One design flaw is the overwhelming weight of the unit. It weighs over 40 ounces with the strap and lens cap included, and this can cause excessive strain when worn around the neck.

The Zeiss warranty is one of the most impressive for rangefinder binoculars. It is a lifetime warranty that is also transferable, so those selling their units or those buying them used to save money can still be covered in the event of malfunction. Very few other optics manufacturers actually go so far to insure buyers’ purchases.

The Zeiss Victory RF provides great optics and amazing distance readings in one device. It may lack the range of some of its closest competitors, but it comes in at a lower price point for those needing basic accuracy while saving money.

It may not be as affordable as other units in the Zeiss lineup, but its quality is intended for serious hunters and shooters.

Hopefully the above Zeiss Victory RF review will help buyers make the decision that is best for their needs in a binocular unit. >>> Click Here for Pricing, Pictures and Reviews on Amazon.com