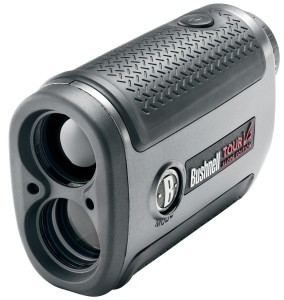 Bushnell Tour V2 Slope Edition rangefinder is an enhanced model of the brand’s Tour V2 Standard Edition model. This version of the device features slope compensation readings, thus it is not suitable for tournament play. The V2 Slope Edition offers 5x magnification and a range of up to 300 yards to a flag.

It is also one of the most compact rangefinders available. The unit is known for its PinSeeker technology that helps distinguish targets from other reflective objects in the background. Use this Bushnell Tour V2 Slope review as a basis from which you can compare rangefinders featuring slope compensation.

The Tour V2 is average in size and shape and feels comfortable in the hand. It also features an easy gripping surface. The unit can be held with one or two hands, with holding with one and operating with the other the easiest method. The display is simple to read, with the distance shown directly below the aiming circle.

The black LCD screen is conveniently positioned on the bottom of the viewfinder so it can contrast against the background of the green, making it easier to read. There are two buttons on the device, one for powering on and firing the laser and the other for engaging scanning or PinSeeker modes.

Automatic scan mode allows the player to pan across a course and receive distance information for a number of targets within its view. This mode may prove to be more difficult to use with other objects close in the background. PinSeeker mode helps distinguish targets from reflective objects nearby.

It does this by ignoring readings from background objects even when they are “stronger” than the target in the foreground. The slope feature reads the angle of a shot and adjusts the distance and club length to accommodate. While extremely helpful, this feature prevents the device from being suitable for use in tournaments.

Under prime conditions the device is supposed to read up to 300 yards for flagsticks and 1,000 yards for the most reflective objects. At less than 150 yards the device reads distances quickly and accurately. At longer distances it is more likely to lock on to objects in the background such as trees. At distances higher than 200 it becomes more difficult to use PinSeeker mode as the device takes longer to acquire targets.

At around $400, the Bushnell Tour V2 Slope model can be considered reasonably priced considering its standard features of scanning and PinSeeker modes along with its slope compensation feature. The only drawback is the need for better performance at slightly longer distances.

The Bushnell Tour V2 Slope Edition features the same technology as the related device but improves upon the standard model by compensating for angled shots. Its performance could be impressive but if you’ve grown used to or plan on graduating to the tournament-legal model, the Slope Edition shouldn’t be hard to master. >>> Click Here for Pricing, Pictures and Reviews on Amazon.com